Australia, 1968. The search for our Prime Minister, Harold Holt has just been called off after he went missing whilst swimming with the sharks off Victoria. Our streets are filling with those protesting the Vietnam war. Evangelistic Preacher Billy Grahame hears the Aussies have a few bucks so he tours the country to cleanse the souls and wallets of those who attended the concerts of The Who earlier in the year. Lionel Rose shows the world that Aussie blokes can and will throw hands. Rain Lover takes out the Melbourne Cup and the appetite for horsepower grows as Australian car enthusiasts embrace all things muscle.

The Ford vs Holden rivalry that really started gaining traction a few years earlier at a little place called Mount Panorama was at full throttle. Ford weighed in with the big, beefy and unforgettable XT GT. The GT ran a 302 V8 that made all the right sounds and produced around 230 bhp.

Holden answered that challenge with the HK GTS Monaro. The tough Holden was powered by a 327 Chev producing around 250 bhp. With both cars in a very similar weight class the race was on for supremacy. For the average punter looking to quench his need for speed and impress the ladies the choice was simply Holden or Ford; or was it? At the other end of Salmon street, away from the older Holden plant in Fisherman’s Bend, Port Melbourne, sat the home of Australian Motor Industries (AMI). By the late fifties AMI employed over 1,600 Australian workers and had assembled brands such as Triumph, the Standard 8, Vanguard and even Mercedes Benz. In 1960 AMI signed a deal with American Motors Corporation (AMC) to assemble and sell the Rambler range here in Australia. In 1961 times were tough for many companies with the great credit squeeze and AMI were forced into a fire sale, selling off most of their assets, stock and even their share in the Mercedes Benz franchise to survive.

Survive they did and in 1963 AMI managed to do a deal to secure the Toyota franchise and by the late ’60s AMI was assembling around 30 different models for the Australian Market and 1968 was to be a big year with the Rambler Javelin hitting the Australian market.

Some would say that the Australian-built Javelins missed their mark, but that point is only valid if you are comparing apples with oranges.   The Javelin was not built as a contender to join the Holden vs Ford rivalry it was built to stand all on its own and stand out from the crowd.

Unlike the Holden and Ford of the day, the Javelin didn’t come with an options list longer than a federal government voting slip. The Javelin built in Australia was the epitome of the term “Fully Loaded”.

If you had the dough to splash on a Rambler Javelin in 1968, you got the burger with the lot. You got the 343 V8, a tough 3-speed auto, power steering, power front disc brakes, a limited-slip diff and an interior like nothing else on offer in this country. The Javelin was a driver’s car and that would be a driver with deep pockets. This was not a car for your average brickies labourer, this beast was for those who could splash out on something special for the garage. The 68 Javelin was sold at $7,495 so comparing that to the HK Monaro at $3,790 or the Ford GT at a mere $4,200 was not really a consideration.

Performance wise the Javelin was certainly worth dropping that cash on. The 343 engine pumped out around 280 bhp and had a kerb weight of around 1,200 kg meaning it was a blast to drive with power to spare and better handling than those in the lower price bracket. When you are averaging 40 bhp more in the lighter vehicle you are not really considering them as rivals but rather something completely different.

Only 90 1968 Javelins were assembled in Australia using a combination of the American supplied parts and Australian made components (to reduce tariffs). What this means is the Australian assembled Rambler Javelin is one of the rarest muscle cars on the planet.

So, does the Australian built Javelin hold a place as one of Australia’s iconic muscle cars the likes of the GT and Monaro? Most certainly not. But where the Australian made Javelin does stand is in a space all of its own. A space of ever-increasing rarity and of late popularity. If you have one of these machines in your garage, those in the know would recommend you hang onto her for a little longer yet. When they say hang on, they mean it as prices for this highly collectable piece of Australian motoring history are on the rise. The Australian built Rambler Javelin is creating a legend all of its own and is without a doubt one of our most underrated muscle cars. 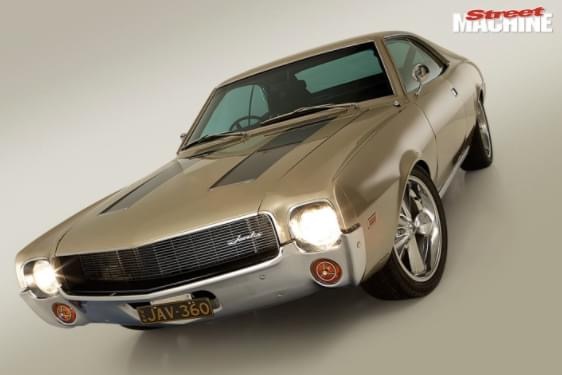